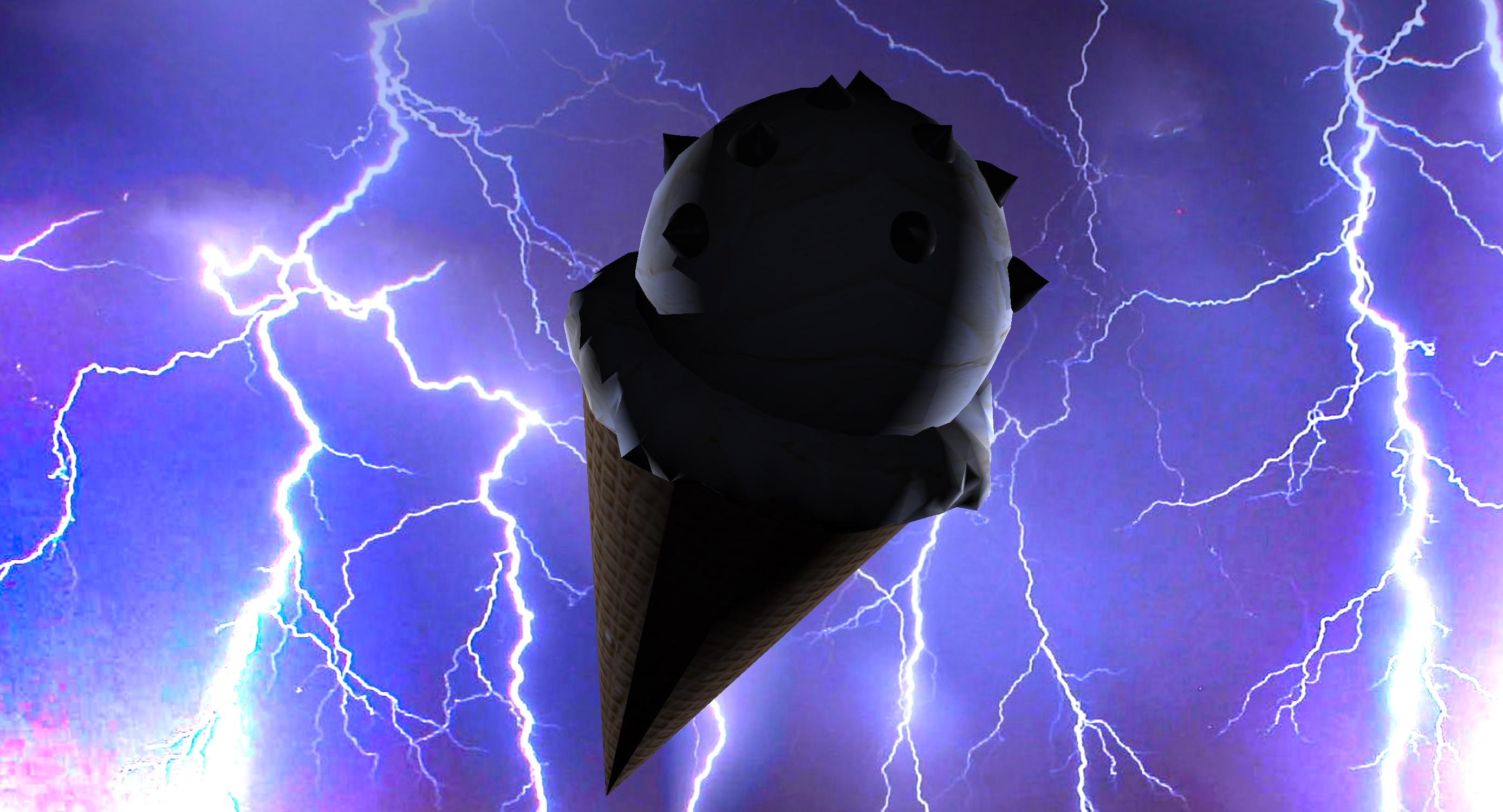 An image put together for an early document highlighting ICM’s marketing strategy. I think it suits the concept of “sweet regret” well.

Last year, I was on the lookout for a songwriter for the theme song for my feature film project “Ice Cream Man”.  This was no simple endeavour.  I needed the right sound, comedic flair, and an artist who was as dedicated to his craft as I was to mine.  Comedic songwriters are far and few between, and most seem to favour folk music.  For ICM, folk music wasn’t going to cut it.  Rock, electronic, or hip hop could all work.  After months of searching, I had compiled a list of less than a half dozen artists I’d like to work with.  Sean Jordan was on that list, and to my relief and joy, he came onboard to write the song.

Before I found Sean, I sat down with a local sound editor I met at a “working with composers” seminar.  One piece of advice he had for me, for working with songwriters, was to attempt to write sample lyrics myself.  This was something I had never attempted, and it wasn’t easy.  My sample song was far too long, and none of it landed in the theme song, but it makes for an entertaining poem.

Below is a taste of what will never be.  Chris Griffin’s “Ice Cream Man” lyrics.

A song pierces the air with promises so sweet
Bringing sweaty hordes to their blistered feet
An opportunity to beat back the dreaded heat
The siren’s song brings you to the edge of your seat.

Bursting onto the scene, arrives a chariot of bright white
All eyes are turned towards this delicious fresh sight
The truck climbs up high on a grassy mound
And summons us all with it’s hypnotic sound

The door swings free, a man steps out happily, his outfit without a stain to see, his smile takes shape explosively.

Children of all ages rush to surround our protagonist
Chocolate, peanut better, and waffle cones upon their list
He dispenses with the skill and speed of a god
All leave pleased, accept for a lactose-intolerant Todd

Todd left his pills at home, leaving him quite grim
Not to worry son, Ice Cream Man Johnny’s got you slim
A pocket full of enzyme goodness will do
Chew a couple tablets to avoid explosive poo.

Like a good boy scout, he’s prepared beyond doubt, don’t whine or pout, cause Johnny’s got wicked clout.
So shout!

Johnny dives into the back of his trusty truck
A first aid kit at the ready, the best of luck
He runs to the aid of the man with oxygen and ice
Heat stroke’s a killer, but Johnny’s saved the day, twice.

A threat to one’s life, a poor man in strife, teeters on the edge of a knife, yanked back from the afterlife.

“Bees!” Cries a girl with a medical patch over one eye
The crowd scatters and flees, the girl’s allergic and might die
She’s knocked down, by a panicked man in a speedo of plaid
Dozens of bees swarm the truck, the sugar drives them mad.

Johnny leaps between the girl and the buzzing mass
His body riddled with stings, tests his resolve and his brass
He slams the truck’s door shut, to trap the bees
Through a frosty window pane, he watches them freeze.

A girl in trouble, to the rescue on the double, vacation reduced to rubble, bees burst your bubble.

From out of the blue, a volley ball burst onto the scene
Slams into Johnny’s head, like a cannon ball into plasticine
He spins on his heels to see what went wrong
His vision beholds a sweet goddess in a bikini and thong.

She rushes to his aid, his head’s still spinning round
She leans in close, and whispers, “dude get the hell off the ground.”
A hard hairy chest replaces a bust so nice and supple
Johnny’s vision restored, reveals tattoos, veins and muscle.

Poor Johnny took a tumble, his sweet goddess was a fumble, the grizzly man grumbles, while motorcycles rumble.

The biker man’s joined by his sunscreen lathered horde
Adorning chains and crosses, cause even devils can find the lord
They break off into formation for everyone to see
A surprise “ball change” or two, expands into full jazz choreography

For large men they are graceful, and their dance is full of fire
The job has got to Johnny, his head throbs as his sanity expires
He turns his eyes away and back onto his truck
To an endless line of customers and half are mad as fuck

A burly dude distraction, the day is losing traction, the mind reduced a fraction, leads to revenue subtraction.

The air shimmers with waves of heat, splitting shorts at the seems
The mob cries out through broiled throats, like hangry goat screams
Within Johnny’s noble truck lies blissful salvation
Beachcomber zombies close in with groans and salivation.

Johnny cranks up the jingle to a haunting screech
To sooth and sway the lost and weary, upon this forsaken beach
Music and sugary dairy to exercise tortured souls
With the speed of a cheetah, Johnny brings them under control.

(Music Solo: Johnny serves ice cream to a crowd whose mood shifts one cone at a time.)

Lovers kiss, dogs fetch balls, and the elderly play chess
Nature is back in balance, and summer is back to being the best
Johnny is left hot, exhausted, and half insane
The man has saved the day, but deep bitterness remains.

The jingle of his truck rings through his mind and invades his soul
The laughter of children makes Johnny cringe, years of service took its toll
He turns towards a truck left open, and thawed out bees
Furiously brought back to life from their cryogenic freeze.

Run Johnny run, and never look back
Summer is a sham and people really suck
Get a nine to five, become a corporate hack
Lose yourself to drugs and never give a fuck
Never please your wife, you pleased far to much
Get divorced, abandon your rotten kids
Ignore your parents and fall out of touch
Fill a shallow grave, and die a jaded…

A frantic run, tripped in mid-stride, face-first into scolding sand
Johnny rolls onto his back and is met by an outstretched hand
Awkward little Todd addresses him in a tender tone
“You’ve had a tough day, sir, would you like my ice cream cone?”

A grin explodes upon Johnny’s weary face in kind
A simple act of kindness, causes the clock to rewind
A gift of peanut covered chocolate swirl ice cream
Reminds Johnny of what it means to laugh and to dream.

You can learn more about the feature film project at Ice Cream Man.

If you want to learn more about the process ICM went through in development, you should check out 3D Storyboarding.

If you want to hear the story of how ICM was conceived of, you should check out The Birth of an Ice Cream Man.

You can find more information, and support the film, at its official online petition at