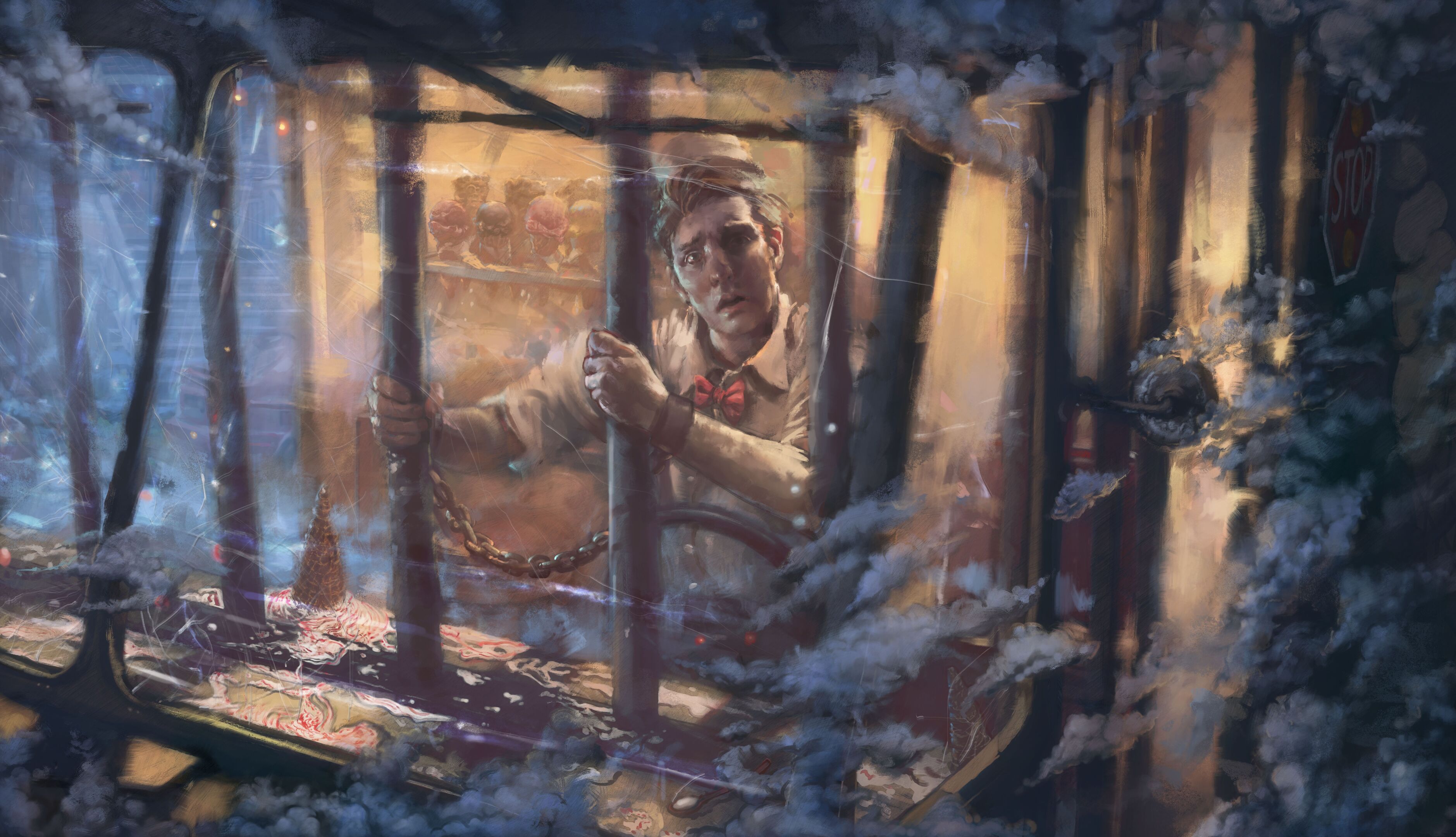 A digital painting conceived by Chris Griffin and illustrated/painted by Ken McCuen.

“With an explosive smile, Johnny dispenses tasty treats to the “wholesome” citizens of his small vacation town. One Saturday shift reveals that all is not well in Johnny’s life. He rebels against the prison that is his job and life, as the musical jingle from his truck slowly drives him towards madness.”

A Few Pit Stops Along the Way:

The screenplay rides along with Johnny on the worst day of his route imaginable. Regular events he comes across on his route, every day, all go sideways.

A Tune to Set the Tone:

“Ice Cream Man” is an unapologetic comedy that speeds head first into topics such as burnout, geek culture, depression, and escapism. As bitter as it is sweet, ICM puts you inside the head of an ice cream truck driver. We jump into the passenger seat and drive along on his route; we experience the hidden rigours of the job, the range of zany customers, and a grating tune that is likely to drive, even the most apathetic of people, completely insane.

Below is a “musical hallucination” VFX demo for “Ice Cream Man”.  We created a visual effects demonstration using previsualization techniques, to give you a peak into one of Johnny’s hallucinations, brought on by the worst work day of his life.

There are plans to shoot a live action “spoiler free” music video for “Ice Cream Man”.  Along with the movie trailer, the music video will aid in promoting the feature film.  The theme song is complete, and it’s lyrics for written and performed by Wordburglar, and the beat was written and produced by Coins.  Chris Griffin storyboarded the music video using “Frameforge Previs”, which can be view below.  Intro music was adapted from the classic tune “The Entertainer” from “Scott Joplin”, by composer Janal Bechthold.  The storyboarded version of the music video is below.

A Feature Length Film in Development

“Ice Cream Man” has been in development since the summer of 2016.  The screenplay was developed by making use of feedback from table reads with fellow writers and professional actors.  The great thing about setting up table reads for comedic screenplays, is that when something works, everyone in the room breaks out into laughter.

“Angry Bear Film Productions” is currently on the lookout for business partners and producing partners, to move forward with the production of the film, and to assist in further executing our new theatrical business model.

Below, is a list of details and support materials created specifically for “Ice Cream Man”:

Screenplay: 99 pages.  ICM’s screenplay has been registered with the “Writers Guild of America West” for protection of the intellectual property.

Production Budget: ICM has been budgeted as an “ultra-low-budget” feature film.  Contact Chris Griffin for details, or a copy, of the budget.

Production Schedule: ICM has been scheduled based on a fifteen day shoot.  Considerations were made for: shorter shooting days for younger cast members, crew lunches, unit moves, and stunts/sfx.  Contact Chris Griffin for details, or a copy, of the tentative schedule.

Storyboards: 3D Storyboards were created for a few of the more complicated scenes in ICM.  The software “Frameforge Previs” was used for this purpose.  To request a look at the storyboards, contact Chris Griffin.  You can learn more about the process involved at 3D Storyboarding.

Business Model: “Angry Bear Film Productions” created a new business model specifically for ICM.  The model integrates the development of the intellectual property with the film’s marketing and early stages of distribution.  To discuss the model, or request the pitch deck for the model, contact Chris Griffin.

Pitch Decks: ICM has two separate pitch decks available.  One of the decks is solely for the project, and contains more relevant information on the project than this website.  The second deck – as mentioned above – is for the business model.  To request either, contact Chris Griffin.  ICM’s Pitch Decks have been registered with the “Writers Guild of America West” for protection of the intellectual property.

If you want to learn more about the process ICM went through in development, you should check out 3D Storyboarding.

If you want to hear the story of how ICM was conceived of, you should check out The Birth of an Ice Cream Man.

Information on the project’s theme song, The Ice Cream Man.

Music in the “vfx demo” was adapted by Janal Bechthold, based on the classic tune “The Entertainer” by “Scott Joplin” . You can check out Janal’s amazing music at http://www.marcandomusic.com/

The concept poster for ICM was illustrated/painted by Ken McCuen.  You can check out more of his work at http://kenmccuen.com/

You can find more information, and support the film, at its official online petition at