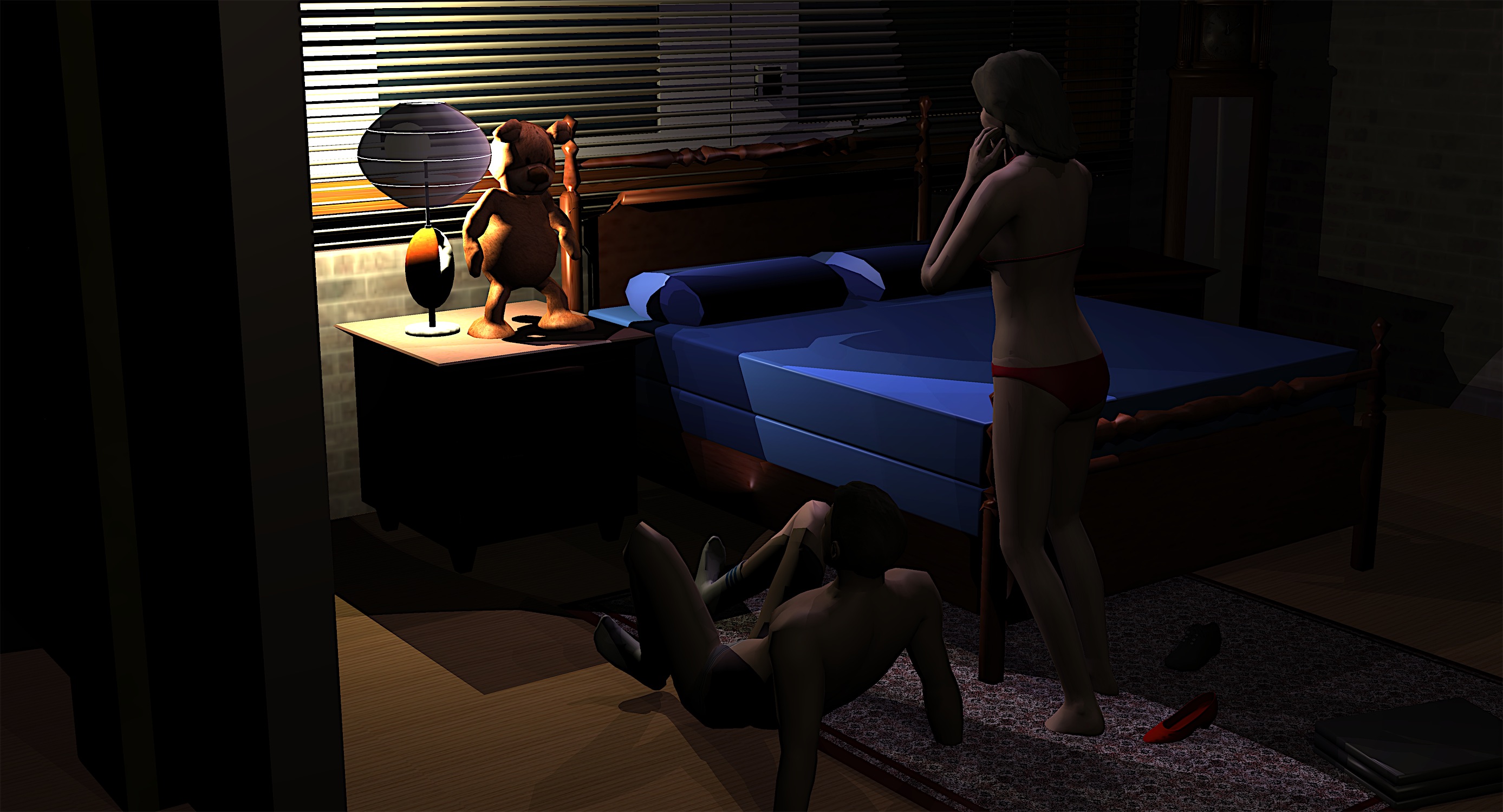 Filmmaking can be a lot of fun, but it’s also a complex challenge.  My first two short films “Pillow Fight” and “There can be only One” were shot without storyboards.  “Pillow Fight” came together with surprising ease.  “There can be only One” taught me some lessons.  It taught me how distance, camera gear limitations, space, and set decoration can complicate intended cinematography.  Sometimes, objects get in the way, and sometimes you just don’t have the space to make use of a particular lens.  3D storyboarding could have given me a vital “head’s up” during those early shoots.

Hand drawn storyboards can be extremely useful.  They can provide both direction and style to a shooting schedule.  They can provide info with “easy to remember” visual cues.  Things are easy to overlook while scanning over a “shot list” or the scripts’ “sides”.  What hand drawn storyboards typically don’t provide, is a “to scale” representation of the actors and sets.  They also don’t provide info on the limitations of your gear.  That is where programs such as “Frameforge Previz” come in handy.

I fell in love with Frameforge.  The process of replicating real world sets, simulating lighting conditions, and setting up shots is time consuming.  That is the down side.  I use the program to storyboard more complicated scenes, ones where problems are likely to arise.  Special effects and action scenes, in particular. 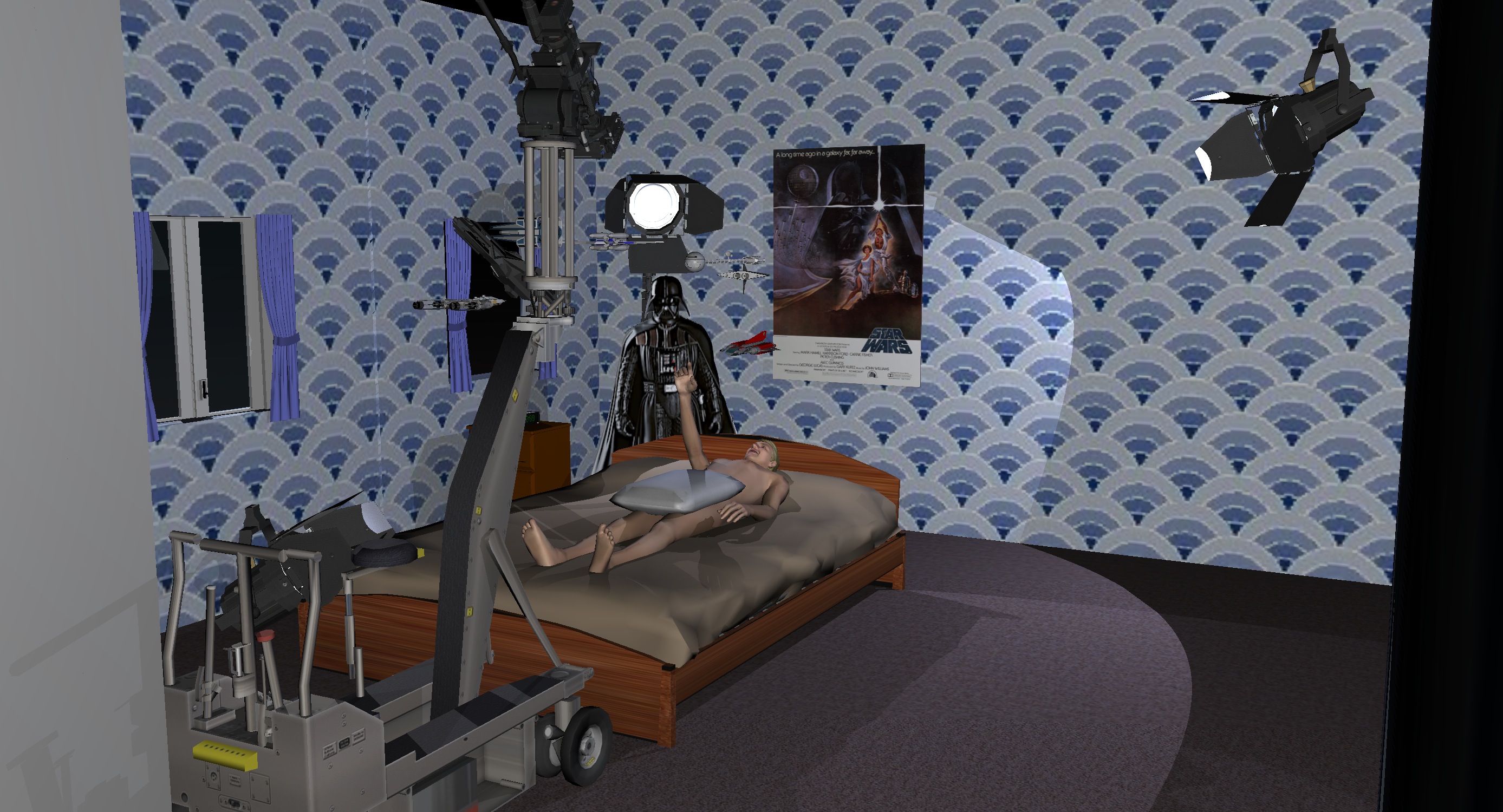 A simulated set and camera setup for the feature film project “Ice Cream Man”. This setup was also used to create a vfx demo for the project.

In the above image, I rendered out an image of a camera setup I created in “Previz”.  The camera attached to the dolly, actually simulates a real life motion picture camera.  “Shots” were created through that simulated camera.  I chose the lens, and the f-stop.  There was also the option of including “depth of field” functionality.  So, I could have adjusted the focus.  I also simulated a potential lighting setup with simulated “incandescent fresnel” lamps.  I think those particular lights were 1Kw lamps.  The space in the bedroom was limited, so I couldn’t use a crane.  It’s a good thing to be aware of before forcing the crew to figure it out the hard way.  I got everything out of the dolly that I could.

The simulated set was also decorated to highlight “Johnny’s” personal taste in decor.  He’s a big sci-fi geek.  We won’t have “Star Wars” merchandise in our shoot.  We will create set dec around a fictional show, we conceive of.  I placed the pillow on his lap to hide his anatomically correct penis.  That was done more to amuse myself than anything else.

There were many ways to insert the vfx stars, but I simulated a more traditional method.  It was tricky, but it worked like a charm.

This program kicks ass.  I was also able to use the software to test different concept posters.  It was a cheap way to revise my poster while colleagues provided me with feedback.  I then hired a professional illustrator and painter named Ken McCuen to come up with something far more polished.

I believe, the more prepared you are in development and pre-production, the more improvisation and fun you can have on set.