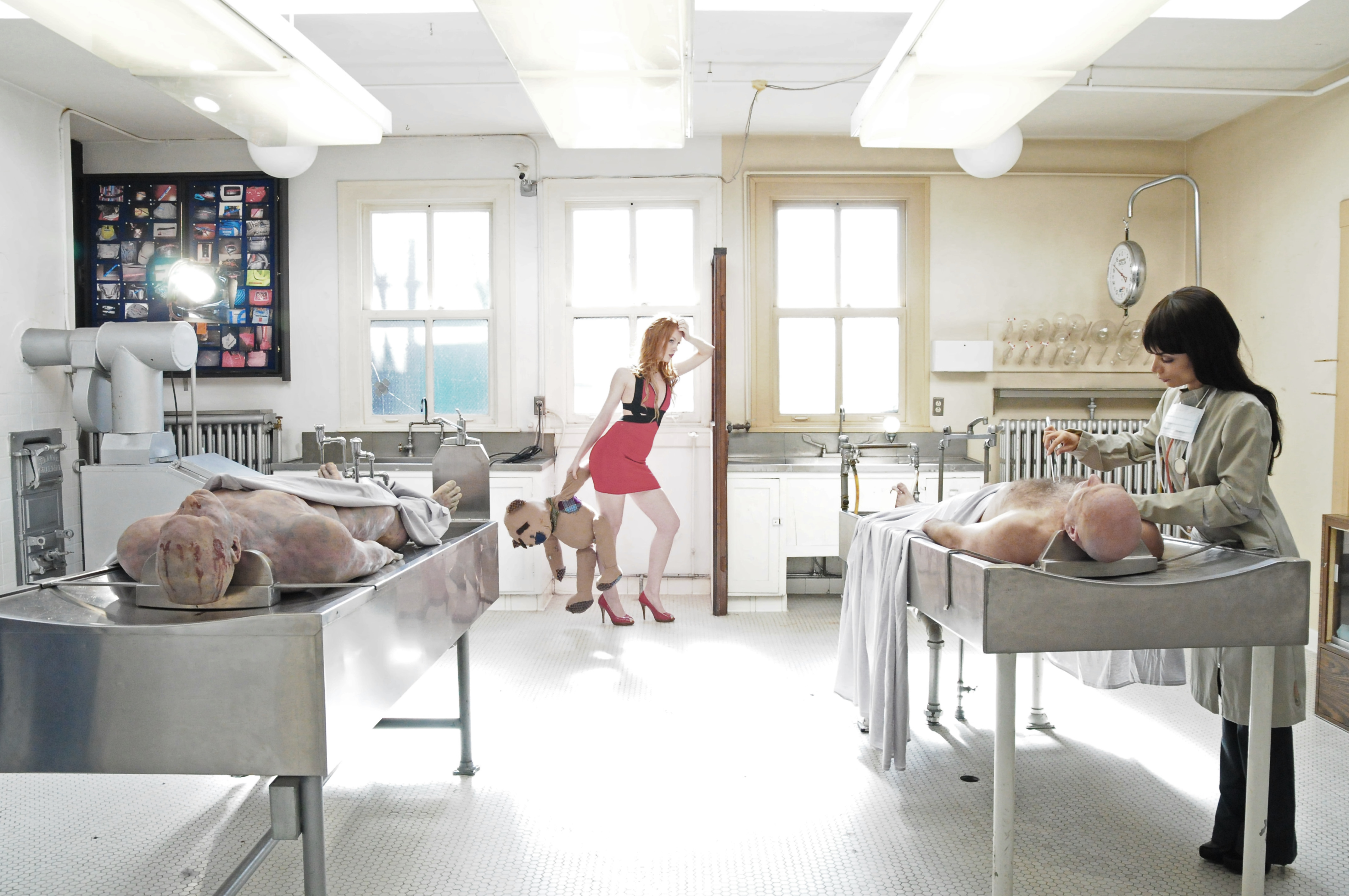 This photo was taken as part of a “set decoration photo shoot” for the short film “Grow the Fuck Up!” They were used to decorate our protagonist, Margret Sapphire’s, loft. They were examples of art she created. The photo shoot took place at the “Vancouver Police Museum” and was photographed by Colin Mills. Our makeup artist, Kevin Priebe, lent us his mock corpse, seen camera left. On the other table was our victim David Dureault, the surgeon Tina Ballochestany, and victim’s daughter was Danielle, she never gave us her last name. This image is separate from the short story “Never Diddle the Dead” but shares similar themes.

“Never Diddle the Dead” is a short story involving short vignettes.  It has been written in the twisted comedic style that is typical of “Angry Bear Film Productions”.  Warning: Story involves graphic violence, sexual themes, gore, and a vomit inducing lack of good taste.  Reader discretion is strongly advised.  Don’t say I didn’t warn you.

Never disturb the dead. It’s been a warning that has been carried over the ages, from civilization to civilization. Allow the dead their eternal slumber. Do not touch their corpses, leave them be. Do not desecrate their graves… and for the love of God, never diddle the dead.

Through the ages, ancient myth, and some might say prophesy, speaks of the dead rising from their graves. They will rejoin the living, and feast upon our flesh. Humanity cannibalized by its unearthed sins, no longer forgotten. Some horrors are better left buried… not dug up and vigorously fucked. Pull a dog’s tale, and it will bite. Prod a corpse’s rotten colon, and you tempt the devil’s wrath.

The day came, when humanity went too far. Their pursuit for immortality took an unexpected turn for the worse. A virus was created that would rejuvenate the integrity of the body’s cells, and reinitiate the processes of youth. The virus rejuvenated something alright, there just happened to be one unexpected requirement… death.

The rise of the undead was swift and vicious. The world’s population was decimated, and was reduced to a fraction. A cure was found, but it was far too late for most. The undead didn’t discriminate; neither good men or women were spared in the onslaught, nor were the wicked. Tales were spun of the brave souls who combated the hordes of hell; this story is not about them. This tale is about those degenerates, who when confronted with the orifice of the underworld, went ahead and fucked it… and in return, were fucked.

The setting sunlight spilled through high windows and down into the basement of the “Maison Funéraire De Destination Finale”. Bathed in a narrow beam of light, and raised on a dais in the centre of the simple room, was a beautiful oak casket. The reddish ocher bricks in the four walls, lent a warmth to the space.

Within the open casket lay a man in his early 20’s, Blaise. His fair skin shone with an eerie brilliance, despite his being dead for days. His state of being did little to diminish his musculature or his well endowed physical features. Blaise had been a man in his prime.

A freak lawnmower accident had been Blaise’s undoing. A steep downhill freestyle lawnmower ride, at dusk, with his belly full of chardonnay and camembert, ended tragically. Youth, alcohol, and fine artisan cheeses make fools of us all.

Blaise’s chum, Timothé, bet him he couldn’t descend the full fifty eight meters in less than ten minutes. Blaise won that bet, with time to spare. He rolled past the finish line, and punctured a lung on a “No Downhill Cycling” sign. Although the fall killed him, the coroner couldn’t explain the bite marks on Blaise’s left ankle.

Good ol’ Blaise laid peaceful in his coffin. A slight and dainty mademoiselle named Simone, leaned over Blaise’s corpse. She gently applied blush to his chiselled cheeks. Simone ran the back of her boney hand tenderly along the length of his jaw line.

Simone, now in her fifties, had spent the better half of her life, bringing out the deceased’s “better and beautiful selves”. She loved how peaceful her “clients” were. They never complained, criticized, judged, and better yet, they never said “no”.

She giggled to herself, as her hand slid down Blaise’s neck, travelled across his broad chest, over his washboard abs, and down under his pants. Simone caught hold of the very thing she so desperately longed for. With a wicked grin, she exclaimed “Oh là là. Grand et robuste comme un cheval.”

Simone gave Blaise’s manhandle a tug; as if she had pulled the cord on a lawnmower, Blaise jumped to a start. Eyes wild, Blaise clasped his powerful arms around her torso. With great force, he pulled Simone on top of him. The jolt of his movement caused the lid to the casket to close overtop of the both of them. All that could be heard were Simone’s screams as the dead man “ravaged” her.

South Barrington was a haven for the wealthy, the successful, and the devout. God looked over the fine citizens of South Barrington, or so they thought.

Bobby lived alone with his aunt, in a house large enough for three families. He moved in with his aunt at the age of eleven, after his parents vanished during a fateful whale watching expedition around the south of Alaska. The crew of the cruise ship “The Grand Magestica” were the last to see his parents, and the unregistered private yacht they sped away on.

Bobby was now thirty seven, and not much had changed. Just him and his aunt.

His aunt was a socialite and was rarely home, which gave Bobby the run of the house. He was free to indulge in ice cream, video games, his indoor bowling lane, as well as more private activities.

Bobby had an affinity for small woodland critters. Maybe less an affinity and more a sick fetish. Bobby owned a bebe gun he nicknamed “The Love Guru”. He was a pretty good shot. Bobby rarely missed, and he always enjoyed his prize.

One sunny Saturday afternoon, Bobby lay back on his favourite lawn chair, in the back sun room, and indulged in a dead squirrel. With the application of a little elbow grease, the squirrel had fit like a glove. It’s warm guts clung tight to the joyful man’s joyful bits, and it’s tail tickled his belly. Bobby gently massaged the animal forward and back, like a sail boat on smooth rolling waves.

After a couple minutes had passed, Bobby felt an odd sensation. The dead squirrel had begun to move on its own, and not in a good way. Bobby pulled his hand away, and in horror, watched the squirrel corpse thrash around. The corpse bit and clawed at the air around it. All things were out of the squirrel’s reach, for it was still empaled and suspended in mid-air by Bobby’s penis.

Time passed as Bobby waited for the squirrel to exhaust itself, so he could remove it. Bobby feared the creature was rabid, and dare not risk a bite or a scratch. He swallowed a handful of viagra tablets he had stollen from his aunt’s purse. The man feared that once he became flaccid, the squirrel would slip free and turn on him. Now he was confronted by two potential fates; a possible overdose from male enhancement medication, or violated back-from-the-dead squirrel rage. Either way, his penis hurt real bad, and that squirrel was still going strong, thrashing around with tooth and claw.

Through the corner of his eye, and out the window, Bobby spotted the barbecue on the back patio. Without a second thought, he ran outside.

Bobby raced over to the barbecue, and flipped up the lid. Gas hissed as Bobby attempted to light the thing, which was tough, because the squirrel kept getting in the way. A shout from above stopped Bobby cold. Up high on his neighbour’s roof was a tall man in overalls. The stranger called down to him “Hey buddy! See you got a zombie squirrel stuck on your cock!”

“Damn straight” the man said “Been all over the news, last couple of days. Zombie virus has been spreading like wildfire. You haven’t heard?”

“Shut up!” Bobby shot back.

Bobby returned to his task. Fucking complicated barbecue he thought to himself.

“Hey! Watcha trying to do with that?” the stranger inquired.

“Burn it off.” Bobby explained.

“You’ll burn your cock off, you moron!” the man yelled “Use the tongs”

“The tongs, pull it off with the tongs!”

Bobby looked down at a pair of tongs that hung from the barbecue’s side handle. Now it dawned on him. With tongs in hand, he clasped on tight to the torso of the thrashing animal. One good tug, and the squirrel slid off of his penis. Unfortunately, Bobbly had put a little too much muscle into it. He accidentally flung the crazed critter up into the air. Before it could land, a hawk flew down and caught it in his talons.

The stranger on the roof watched the hawk fly away with its infected pry. He called down to Bobby “Goddamn it! Now we’re gonna have zombie birds. I came up here for safety. Fuck you!”. He looked down towards the street below. “Here they come, you better get yourself inside!”

Bobby glanced down at his gore coated appendage with feelings of relief. His relief was short lived, as the groans of hundreds, possibly thousands, of infected humans caught his ear. He could see them approach through the cracks in the fence. In haste, Bobby ran inside and locked the door behind him.

You can also read this story on Wattpad.