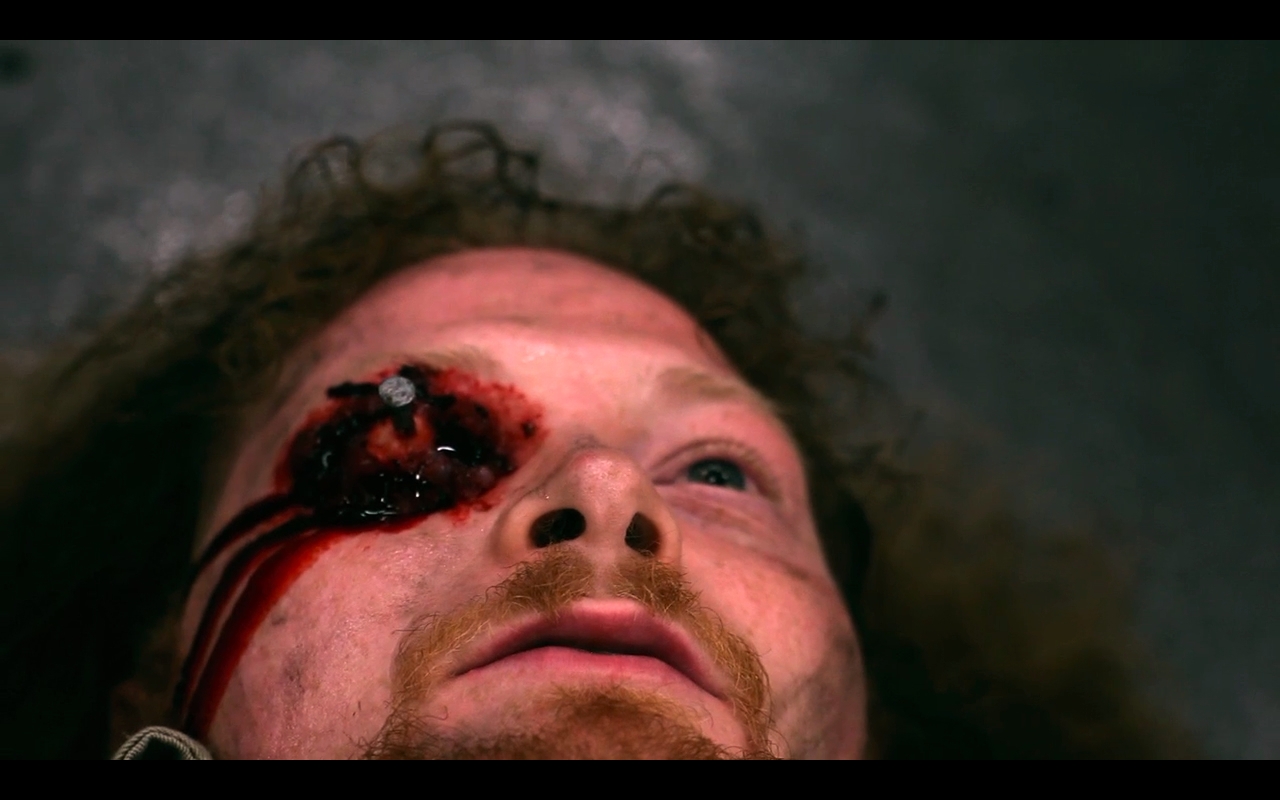 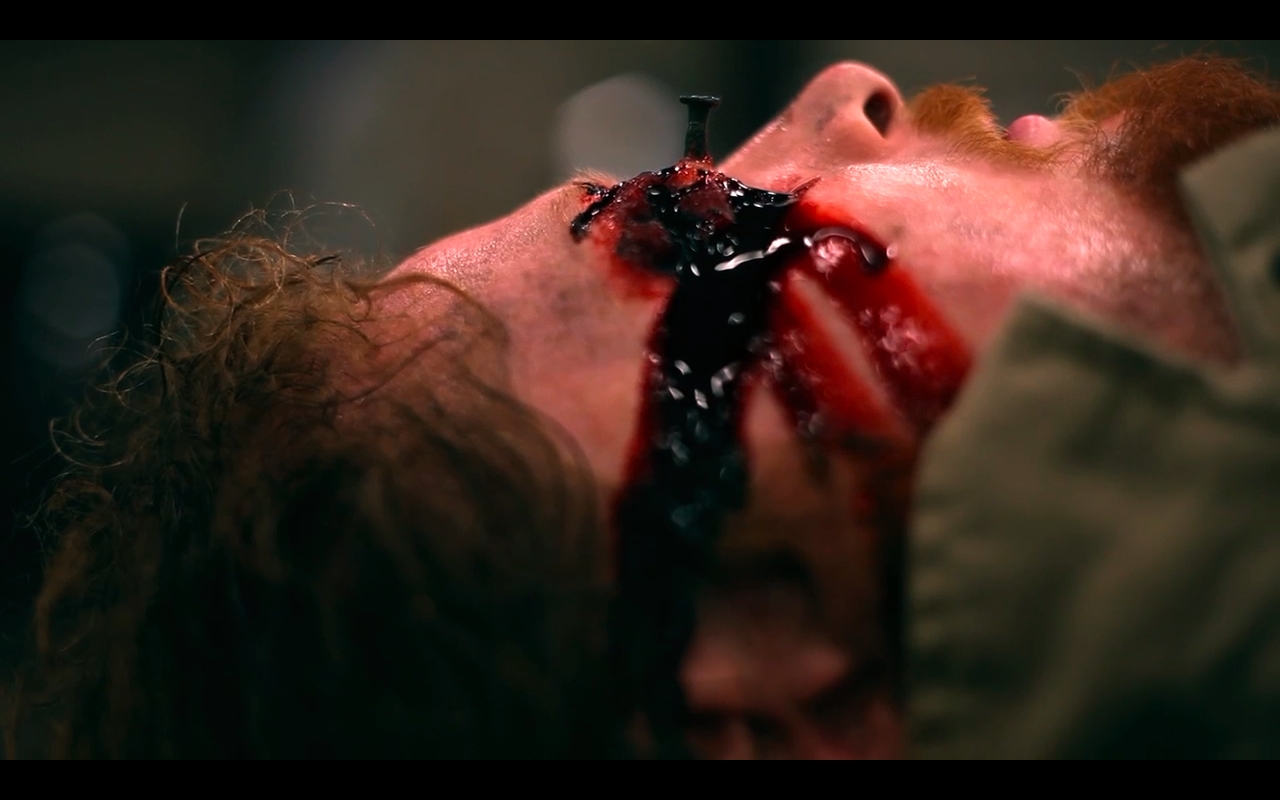 An image captured from “Angry Bear Film Productions” short horror film “Mansion of Terror“. The talented Andrew Green played the role of our protagonist, Tessa’s, abusive father. SFX makeup was created by Chelsea James, and our Director of Photography was Shawn Seifert. Although not associated with the short story “Never Diddle the Dead” it shares its same twisted sentiments.

“Never Diddle the Dead” is a short story involving short vignettes.  It has been written in the twisted comedic style that is typical of “Angry Bear Film Productions”.  Warning: Story involves graphic violence, sexual themes, gore, and a vomit inducing lack of good taste.  Reader discretion is strongly advised.  Don’t say I didn’t warn you.

A cure to the virus came with time, but it didn’t come easy.  Scientists slaved day and night, often in the harshest of conditions.  Most advanced facilities had been over-run by the undead.  Some micro-biologists and geneticists had to resort to converted warehouse space and abandoned hospitals.  The cure was eventually produced in the most unlikely of places, a lab set up in an old war veteran’s legion.  Not even the undead could fuck with a bunch of drunk and ornery old military vets.

Another successful lab had been set up in a still functioning “massage parlour”.  Doctor Nathaniel Plank had arrived for his weekly “rub and tug” when he took a look around and realized they had really nice showers, perfect for “sanitation of samples”.  Plank produced a promising anti-body stimulant, but it never saw the light of day.  One rub and tug too much, and Plank met his maker.  His favourite masseuse turned somewhere between the rub and the tug.  Plank learned a lesson that so many unfortunate souls, during that time, learned the hard way, never diddle the dead.

One of the greatest obstacles scientists came across, was the virus’s tendency to mutate.  In some regions, it became airborne, killing and turning thousands.  In other regions, the virus tainted crops and soil, and eventually found their way into water supplies.  Those mutations altered the way the virus would affect the body, and how quickly it would spread.  Some corpses became re-animated in a matter of minutes, some took days, and others took weeks.

Rome had long been seen as a holy land.  A city state blessed by God himself.  A place where the guilty could repent and find everlasting life in paradise.  No sin was beyond confession or absolution.  Sister Aurora Ricci knew this to be true, from an intellectual standpoint.  Deep down, she wasn’t so sure.  Some things, she couldn’t bring herself to admit to aloud.

She was raised on the belief that death would bring all people closer to God.  It seemed logical to her, that if she wanted to get closer to God, all she had to do was to get closer to the dead.  It made sense to her.  Death was the channel by which an orgasm passed from one world into the next.

Sister Aurora served the lord at the “Chiesa Del Penitente”.  The towering stone walls of the ancient cathedral had been her home for the last five years.  Her dorm room had a single window that looked down on a beautiful and expansive graveyard.  Aurora’s fellow sisters regarded the graveyard as a place of rest.  She saw it as a sprawling outdoor auditorium, sold out to her most adoring audience.

A Place of Rest and… Recreation?

At night, Sister Aurora would steal away from the Cathedral, and into the graveyard.

As a young woman, Aurora’s parents drilled a belief into her impressionable mind “There is no greater a love than that between you and the lord.”  Aurora took that to heart, and made it a habit to indulge in that love every chance she could.

One night, the good sister was gleefully skipping through the dark and dank graveyard, when she caught eye of a delicious sight.  The heavy steel door to a brand new stone mausoleum had been left wide open.  Aurora saw an opportunity for a private show, one where no one would hear her, except for the freshly dead… and God of course.  She stepped inside.

Mausoleums, such as this one, were often build and reserved for people of power, wealth, and influence.  This one in particular, had been reserved for a family of three.  Three vertical chambers had been built into the side wall, one on top of the next.  The two top stone chambers were occupied by thick wooden caskets.  The bottom one was left empty.  Engraved plaques were fused to the stone beneath each casket.  They were inscribed with the names “KENNETH THOMPSON” and “JUDITH THOMPSON”.

Sister Aurora had overheard rumours that surrounded the Thompsons.  The Thompsons had been American Entrepreneurs and the church’s most generous donors.  Their family had immigrated from Italy to the USA in 1906.  Their original surname was “Esposito”, but changed it to Thompson during the 1930s.  Despite a sorted history, they maintained their ties to the church.

Their deaths had come unexpectedly.  They had fled the country from a small port off the coast of Alaska.  The Thompsons had fled due to federal charges of international money laundering, bank fraud, and political bribery.  All communication had gone dark, up until their private yacht was found floating alone, 50km off the coast of Spain.

The Spanish coast guard had discovered Mr. and Mrs. Thompson, piled up dead and naked in the boat’s hot tub, along with a half dozen unidentified individuals, equally dead and naked.  The only surviver was their Portuguese deck hand, Filipe Da Costa.  The only story the coast guard could goad out of Filipe was the simple phrase “Orgia deu errado, orgia deu errado.” he repeated axiomatically.

The head priest at the Chiesa Del Penitente managed to retrieve the bodies from Spanish authorities through the careful application of laundered funds, bank fraud, and political bribery.  Now the couple, finally free from fear of self-induce repercussions, could lie in peace.  As far as Sister Aurora was concerned, they were ripe for the picking.

When Opportunity Presents Itself

Aurora sat on the floor, back against the wall, legs spread, panties down, and eyes on the caskets.  She held a long red candle out in front of her face.  A tiny flame flickered, illuminating the wicked grin on her face.  She seductively blew out the flame, and slipped the thick, warm, and smokey candle under her skirts.  The dance with the dead had begun.

The energized sister moaned out loud as she shook what the good lord had given her.  She defeated the candle’s purpose, time and time again, too wet to hold a flame.  She moaned louder, but suddenly froze when her moans were reciprocated.  Aurora’s heart beat out-of-control as she desperately tried to control her breathing.  She sat still with attempted silence.  An unseen voice groaned in reply, followed by a second higher pitched voice.   The voices were coming from the caskets.  They moaned and groaned in unison.

In all of her life, Sister Aurora had never been moaned at by people from high society.  She had to admit, it kind of made her feel like a princess.  As shocking and as inexplicable as the situation was, it was working for her.  If Jesus could come back from the dead to host a dinner party, why couldn’t two successful business people come back for a little cemetery foreplay?  All was possible in the lord’s house.

Time stretched on.  With each passing moment, the corpses gained additional strength and vigour.  They moaned louder, and they excitedly banged and thrashed against the inside walls of their coffins.  Sister Aurora moaned in harmony with her new friends.  She pressed her naked chest against the hard wood of the lowest coffin.  She could feel the vibrations from Kenneth’s banging surge through her virgin body.

As if jealous, the corpse of Judith gurgled angrily from her top shelf perch.  Her casket shook harder. With supernatural might, the coffin bounced up and down in place.   Sister Aurora was not the kind of nun who would dare stand between a man and his wife, but that day, that’s exactly who she decided to be.  She stripped naked, dragged a foot stool over to the stacked chambers, and climbed up.

A Rock and a Hard Place

There was just enough space between the top of Kenneth’s casket and the stone shelf above.  She squeezed her nude form in between a literal rock and a hard place.  The varnished wood felt both smooth and sticky against Aurora’s soft flesh.  With the front of her body held tight to the top of the casket, Sister Aurora began to grind her “girl” up against the thumping wood lid.  Her spread legs practically melted into the top of the casket.

Sister Aurora rode that casket like a mouse riding an angry badger, or a corrupt politician riding the misfortune of their constituent’s gullibility.  Both corpses intensified their frenzied attempts at escape.  Right when Sister Aurora felt like she couldn’t take anymore, that ecstasy would finally reach its limit, the stone shelf above her cracked.  Judith’s casket broke through the shelf below it, and Aurora became sandwiched between the two.  Aurora had always dreamed of being sandwiched between two writhing bodies, but this was no dream.  Pain beyond belief shot through every inch of her body, as the caskets slammed against both her front and backside, as if her flesh were blades of grass being chewed by hungry ox teeth.  She couldn’t scream, for the weight that pressed down on her, forced all the air from her lungs.

She prayed to God for forgiveness and mercy.  Her prayers were answered as the lower shelf gave way.  Aurora, along with both coffins crashed down into the empty chamber below.  The impact squashed the nun like a pancake.  Her skull and ribcage collapsed inward in unison.  Blood oozed out from in between the tightly pressed coffins.  If the greatest joy that comes from sex is derived from anticipation, then even the greatest climax will disappoint.  Sister Aurora’s final climax failed to disappoint with its epic disappointment.

You can also read this story on Wattpad.