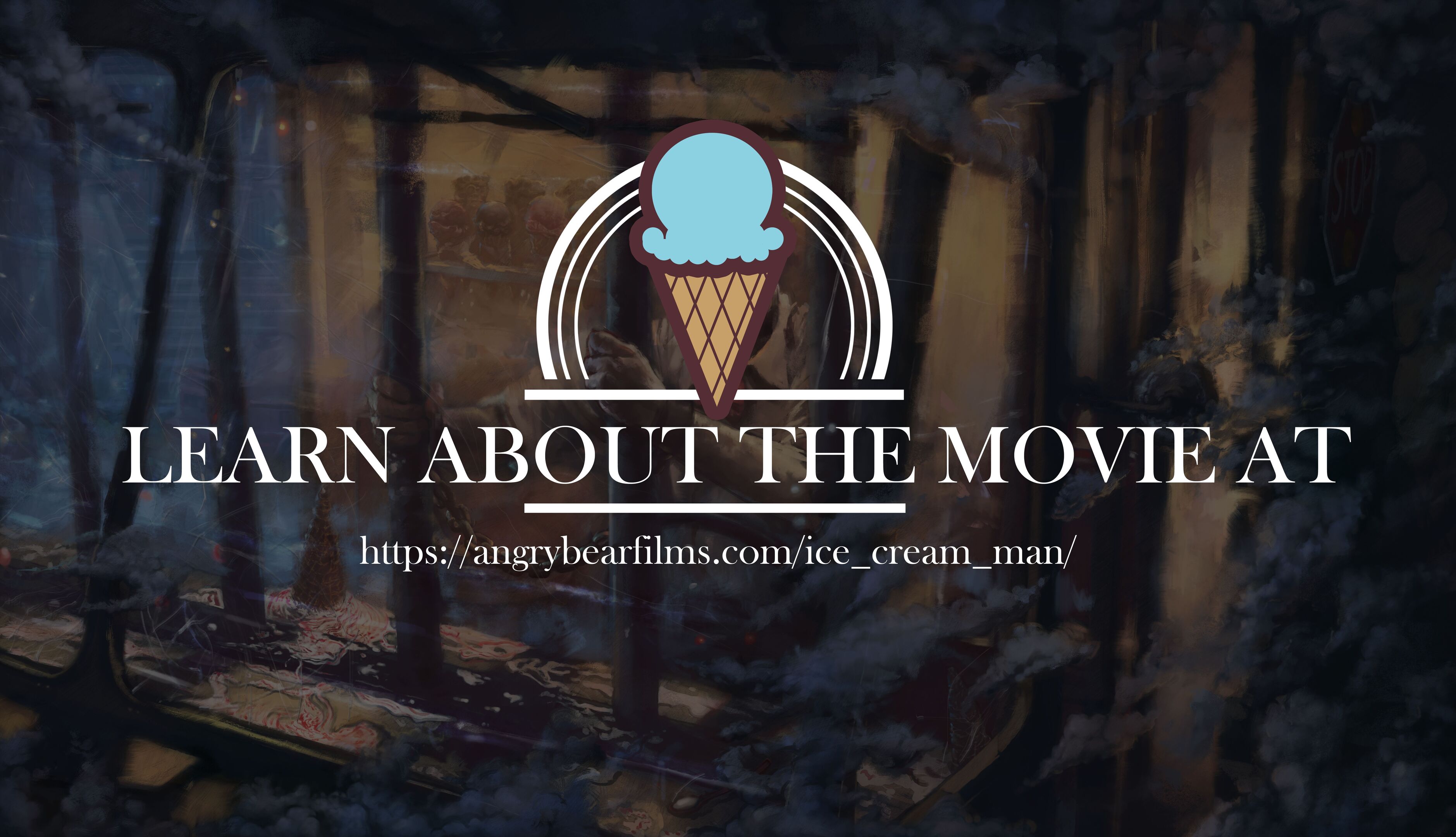 A graphic that was designed to go along with the “Ice Cream Man” theme song, when posted on youtube.  Painting and graphic design created by Ken McCuen, https://www.kenmccuen.com/

It’s been a long while since I posted a new blog entry to the angry bear website.  The reason being, my attention has been dedicated to research and networking within the film world.  I’ve been watching a lot of independent comedy films, and contacting the producers responsible for the films I really enjoyed.  Most of the films I’ve watched, were recommended to me by colleagues, friends, and random cinephiles on Reddit.  Taking recommendations proved to be a good idea, because most of the films I’ve watched are fucking hilarious.

Over the last three years, I’ve been hard at work developing a dark comedy feature film titled “Ice Cream Man”.  The screenplay did well in table reads and peer reads, but as you know, it takes a lot more than a quality screenplay to make a good movie.  Within those three years, I slaved over trying to figure out new ways to make movies.  I’ve produced seven short films.  Most of those shorts turned out well, but there were flaws in the process that cut their life span and reach short.

Throughout my journey, I produced promotional and test materials for “Ice Cream Man”, including a vfx demo, pitch decks, concept posters, a theme song, a prop prototype, among other things.  I even came up with a new business model to go along with it.  Come the end of last year, 2019, I came to a conclusion.  I was spending too much time developing the business model, a model many producers might shy away from.  Additional years could slip by as I labour to perfect the model.

The screenplay is solid, as are the promotional materials.  There came a point, when I had to admit to myself, that this can’t go on forever.  Ready or not, I have to continue to push and pitch this project.   Producers will either take a chance on it, or they won’t.  I certainly can’t do this one on my own.  I’ve reached my “do or die” moment.

It’s taking a lot of time to watch these indie films, from beginning to end.  Except for a couple movies that were so bad I couldn’t finish them.  Some filmmakers might argue that I should just look up names and pitch to any and all producers.  It might turn out that they are right and I’m wrong, it’s a possibility.  “Quality over Quantity” has always been a mantra I’ve followed.  I want to ensure, that if I do strike up a partnership, it’s with the right people.  People who can relate to my tastes and my mission as a storyteller.  I’ve been mixed up with the wrong people before – more than once – and it can be a nightmare come to life.  Even if they have leverage and resources, it can all go up in flames; especially if they want to take short cuts, or throw innocent people under the bus.

Six years back, I had another feature I hoped to get off of the ground.  I put a ton of work into the screenplay, and it killed at table reads; had people falling out of their seats with laughter.  It was called “Stuffed!”, based on my short film “Grow the Fuck Up!”.  I made a lot of mistakes with that project.  First, it was too ambitious for a first feature.  I took the project to LA to pitch, but I didn’t pitch enough.  Pitching is difficult and uncomfortable.  I decided to take some bad advice and try and build an audience around it; using transmedia content.  I’m no good at building a fan base, lesson learned.  The screenplay was good enough, better than good enough, but I personally didn’t feel good enough.  Deep down, I felt like a loser who nobody would put their faith in.  Relying on other artists – who had their own insecurities – for moral support didn’t help either.

Another mistake I made with “Stuffed!” was in casting.  I was happy with the actors I had cast in lead and supporting roles in the short film.  I wanted to reward them for helping to make the short film as good as it was.  Fellow filmmakers suggested I leave the roles open to big name actors; I ignored that advice.  I pitched the project with my actors of choice.  This wouldn’t have been as big an issue, if the actors were as dedicated to the project as I was.  Their attitude was more along the lines of “if it’s greenlit, great, if not, oh well”.

I should have left the roles open to big name actors, or at least, unknown actors who were willing to go to war for the project.  Why would producers take a risk on my project if my actors wouldn’t?  This was entirely my mistake, and it also tore away at my self-esteem.  Some producers really liked my pitch.  I should have told my cast “I really wanted you onboard, I pitched the project while going out on a limb for you, and you seem indifferent, I’m sorry, but I can’t give you the role.”  After that, I should have kept pitching, rather than wasting my time on building a fan base.  That or pitch/produce a less ambitious project.

I learned my lessons.  There is no predicting how my current strategy with “Ice Cream Man” will turn out, but I’m giving it a go.

Click to learn more about the author, Chris Griffin.