Black Out the Sky 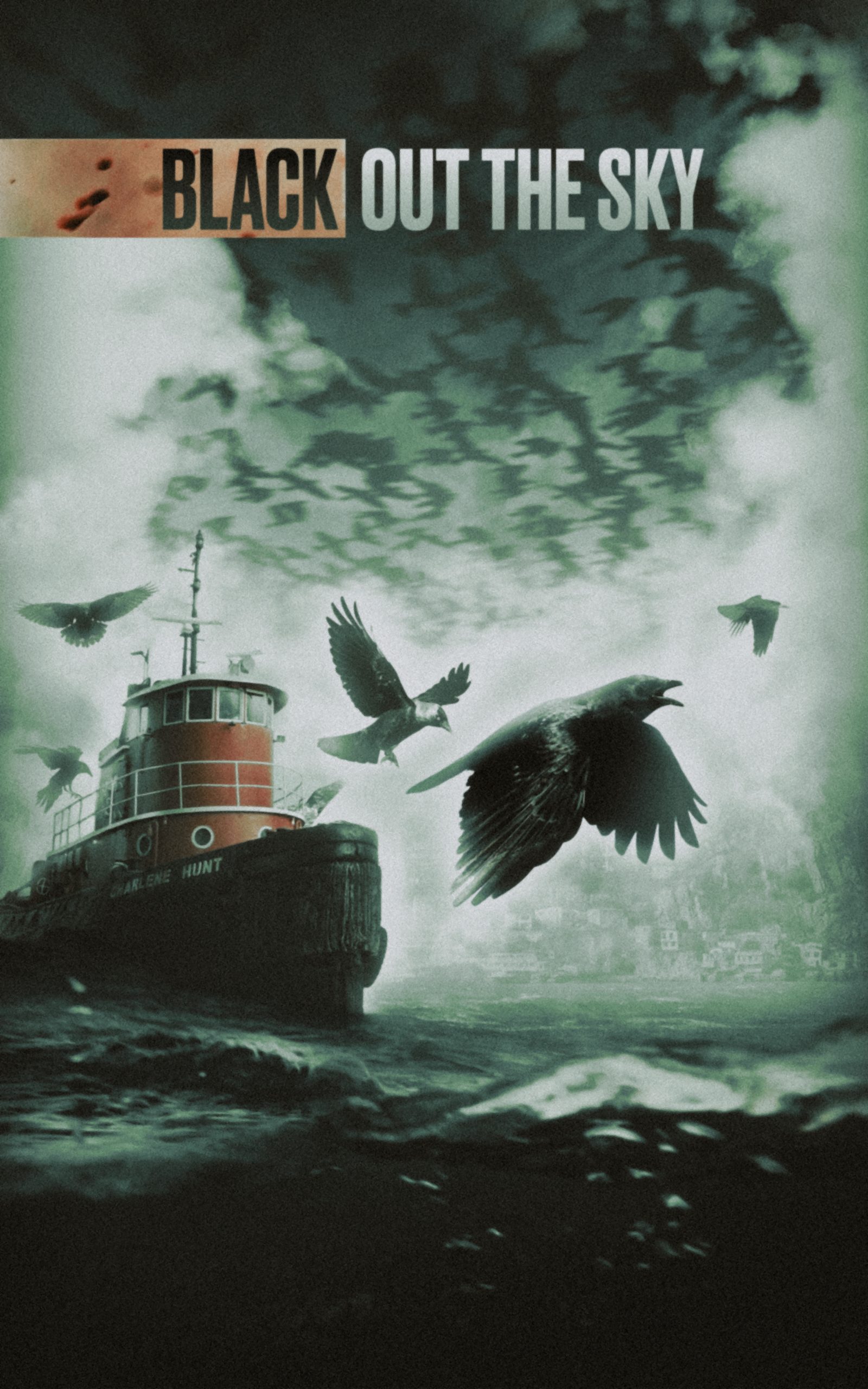 The poster was designed and created by OLEH HOLYZOV, who also goes by DEVIN COY.

You can check out awards won by “Black Out the Sky”, and other screenplays of mine, by clicking on AWARDS.

“Black Out the Sky” is a sci-fi/horror story, that is both quirky and terrifying.  It was inspired by the five months I spent living in the capitol of Newfoundland, the city of St. John’s.  It’s a place like none other.

I wrote both a feature length version and a tv pilot version of the story.

Note: A “murder” is the common term used to describe a large congregation of crows.

In the midst of a global famine, the isolated island city of St. John’s, Newfoundland, finds itself the target of an ever growing Murder of hungry and desperate crows. The Captain of a local fishing vessel, Liam Murphy, must lead his crew through the perils wrought by the cunning and relentless birds. Utmost in Liam’s mind, is reaching his wife Ingrid, before the ravenous murder descends on the city.

During a world-wide famine, the city of St. John’s, NL, finds itself over-run by a massive murder of ravenous crows.

In the midst of a global famine, the isolated coastal city of St. John’s, Newfoundland, Canada, finds itself the target of an ever growing Murder of hungry and desperate crows. The Captain of a local fishing vessel, Liam Murphy, must lead his crew through the perils wrought by the cunning and relentless birds. Utmost in Liam’s mind is reaching his wife Ingrid, before the ravenous murder descends on the city.

“Black Out the Sky” is, at its heart, a story about survival. Viewed both through the perspectives of Liam , and an intelligent lab crow known by its ankle tag number, 00780, we see what choices must be made – for man and crow alike – when faced by the possibility of extinction.

Liam Murphy is a quirky, kind, and adventurous old Newfoundlander. Once a world traveller, Liam has been settled back in St. John’s, with his loving wife Ingrid, for decades now. Liam is dedicated to taking care of his artistic and spirited wife, as she struggles with multiple sclerosis. The 49-year-old fisherman finds himself torn between his responsibilities and his longing for adventure. When fishing is hindered by Russian pirates, Liam is offered a commission as Captain of the state of the art fishing vessel, the “Lady Roxanne”. He just can’t say no.

A small but crafty crow, 00780, spent most of his life in captivity. 00780, a common American crow, was raised as a part of a study on the intelligence and problem solving abilities of members of the corvid family of birds. With his skills honed through constant tests and experiments, 00780 finds his abilities pushed to their limits, when the laboratory is shut down, and he’s discretely released into the wilds of Newfoundland. 00780 finds a new life amongst a large murder of wild crows, as tragedy befalls them.

The city of St. John’s struggles to feed themselves, while shipping crops to their European allies, whose fields have been devastated by an invasive strain of fungus. The food shortage hits more than just the human inhabitants of Newfoundland, as a growing murder of crows bears down on any available field of crops. A cull on the crow population forces the murder of crows to escape to the rocky coast.

Forced to adapt, and survive at all costs, 00780 leads hundreds of thousands of his brethren, in a siege on the isolated town. The murder blacks out the sky, as they bombard the city with stones, glass, and pieces of metal shrapnel. When 00780 discovers a means to spread fire across the town and its wooden homes, Liam and Ingrid are forced to find a means of escape, or meet certain doom.

0 0
No Comments
Black Out the Sky
Screenwriting Competitions: Accepting Your Own Oddities